Tyre Fitting in Salford could not be easier. With TyreFitDirect we can supply and fit tyres to nearly all UK mainland destinations either on one of our mobile vans or at one of our depots. So if you are looking for tyre fitting in Salford you have just found your local online supplier. We fit tyres on almost all makes, models and derivatives of cars and vans and are available either online or on the phone.

At TyreFitDirect we pride ourselves in offering some of the best deals on the web. Please peruse our site to check out some of our offers. We look forward to fitting tyres for you in Salford soon. TyreFitDirect, the Salford tyre fitting company of choice.

Greater Manchester is a metropolitan county in North West England, with a population of 2.7 million. It encompasses one of the largest metropolitan areas in the United Kingdom and consists of ten metropolitan boroughs: Bolton, Bury, Oldham, Rochdale, Stockport, Tameside, Trafford, Wigan, and the cities of Manchester and Salford. Manchester is home to the world’s oldest railway station. Manchester is a tourism hotspot and is popular for things such art, sport, culture and music. Liverpool Road station was the Manchester terminus of the world’s first railway line that ran between Manchester and Liverpool. It opened on 15th September 1830 and closed to passenger services on 4th May 1844. The station is now part of the Science and Industry museum. The world’s first stored-program computer was built at the University of Manchester and ran its first program on 21st June 1948.

The City of Salford is a city and metropolitan borough of Greater Manchester. Salford City Stadium hosted the Rugby League World Cup. Salford’s finest new music festival, Sounds from the Other City celebrates its tenth anniversary. The city hosted the world’s first ever Eccles Cake Festival. Eccles in Salford is perhaps best known for the Eccles Cake. Dating from the 18th century, they were first sold from a shop owned by James Birch in 1793. Traditionally made in the town from a recipe of flaky pastry, butter, nutmeg, candied peel, sugar and currants, they are sold across the country and exported across the world. As one of the world’s first industrial cities, Salford is flooded with historic achievements – including the world’s first free public library. Worsley village was the site of the transport revolution thanks for the Bridgewater Canal and there is 600 years of history packed into the haunted Tudor house, Ordsall Hall. 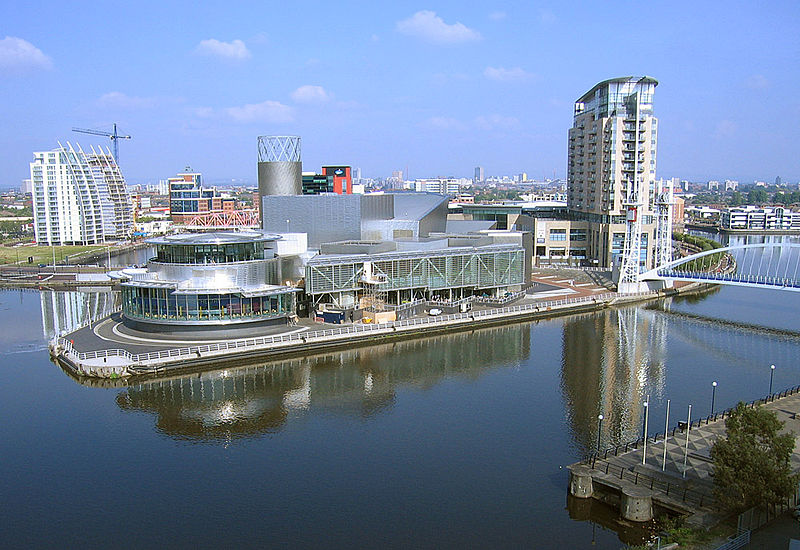 The city has a population of approximately 235,000 people. It is bounded on the south east by the River Irwell, which forms its boundary with the city of Manchester and by the Manchester Ship Canal to the south, which forms its boundary with Trafford. The metropolitan boroughs of Wigan, Bolton and Bury lie to the west, northwest and north respectively. Some parts of the city, which lies directly west of Manchester, are highly industrialised and densely populated, but around one third of the city consists of rural open space. This is because the western half of the city stretches across an ancient peat bog known as Chat Moss.