November 2012 saw new EU regulations come in to force to make comparisons between different tyre makes and models easier.
These labels take their inspiration from the energy efficiency labelling that can be found on white-goods and electrical equipment such as washing machines and inkjet printers. They are intended to show, in a simple and clear way, important information about the specific performance of each model of tyre so that the consumer may make an informed decision between two tyres – however the areas of performance that they compare are limited.

“The label is NOT a quality label covering all aspects related to the overall performance of a tyre. Other parameters such as behaviour in aquaplaning or handling on curves could NOT be included in the labeling scheme because of the lack of recognised standardized testing methods”.

The new label has been designed by the EU and is shown below: 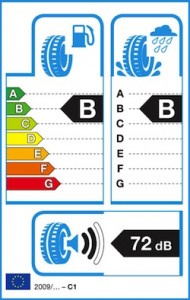 The Fuel Efficiency of a tyre is measured by establishing its “Rolling Resistance”. This quantifies the amount of energy required to turn the tyre. The lower the rolling resistance of a tyre, the more fuel efficient it will be. Your car tyres could affect your fuel efficiency by up to 20% so the choosing the right tyre can make a significant difference to your bill and also the amount of CO2 your vehicle emits.

The results of the Rolling Resistance test are graded A to G. A is the best and G is the lowest. Choosing an A rated tyre rather than a G rated tyre could reduce your fuel bill by up to 9%.

The Wet Grip performance measures the wet weather braking efficiency. The tyre undergoes two tests at 50mph which are designed to test the straight line grip in wet conditions. These tests are not intended to test cornering performance in the wet, only straight line braking.
The results of the Wet Grip test are graded as A to G. A is the best performance and G is the lowest. Each grade represents an increase braking performance roughly equal to 3m. This is approximately the length of a car. Therefore buying an A grade tyre rather than a G grade could result in an improved wet braking of up to 18 metres (nearly 60 feet!)

The External Noise performance of a tyre measures, in decibels (Db), the level of noise produced by a tyre as it turns on the road. This is expressed as a number of Dbs and graphically as a varying number of black “sound waves” as shown on the icon to the left.
It represents a noise output level between the current maximum and the new lower European limit that will be introduced as Regulation 661, between 2012 and 2016